Iceland provides a number of locations filled with scenic beauty and adventure, a lot of them are in the highlands and are only accessible using mountain roads marked as F-roads. These places include Landmannalaugar, Þórsmörk, Askja, Hveravellir, just to name a few.

F-roads in Iceland are often narrow gravel roads and are only accessible via jeeps. 4x4 jeeps are required to travel on the F-roads. Although not marked as F-road, a 4x4 jeep is also required to drive Kjalvegur (Kjölur). 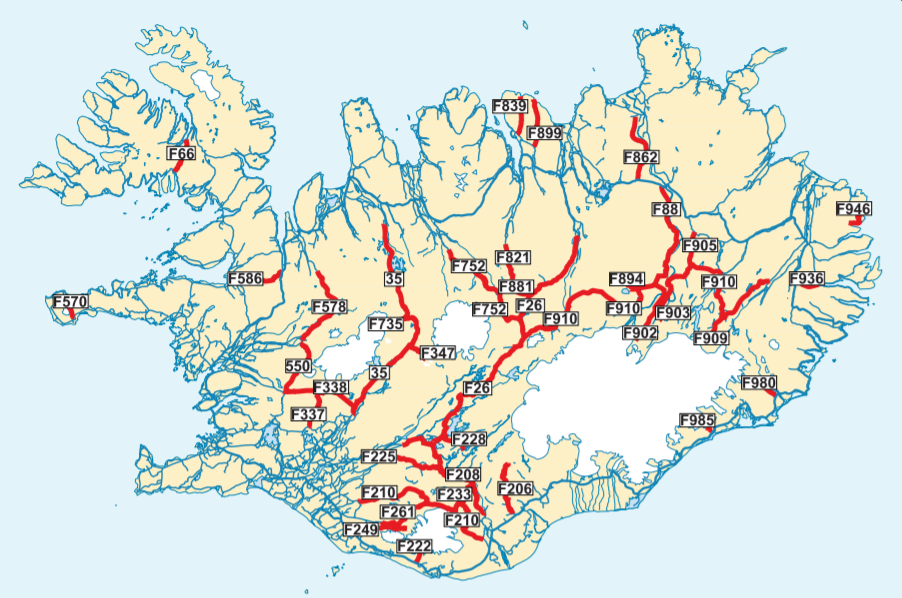 The F-roads: A Beautiful Journey

One key aspect of taking the F-roads to the highlands is the beautiful personal access they provide to Iceland’s most beautiful areas. Known for its majestic highlands, Iceland’s beautiful scenery is there for all to see on the F-roads. Hence, for a personal experience with the mountainous area, a 4x4 rental in Iceland is necessary to do so through the F-roads.

When are the F-Roads in Iceland Open?

Due to their location in the country, the F-roads in Iceland are only open during parts of the summer. There are no exact closing and opening times, with both varying for different F-roads based on the weather.

The opening time of the F-roads depends on factors such as snow, the road condition, and water levels. All three are major concerns in Iceland, with the condition of the roads deteriorating due to their constant interaction with rain and snow.

Hence, the opening times tend to vary every year. Some F-roads in Iceland are opened for the public in June, whereas others tend to open in July. All of the F-roads close in mid-to-late September usually.

Driving on the F-roads in Iceland can be a challenge for all kinds of drivers due to its conditions. The conditions even make driving on a 4x4 rental dangerous due to:

Due to the conditions, a 4x4 jeep rental is a necessity, with a 4x4 raised jeep also being recommended in certain conditions. Any driver not confident in their skills or inexperienced with driving a 4x4 should abstain from driving on the F-roads in Iceland.

Driving on the F-roads in Iceland requires complete attention. Furthermore, maintaining a slow and steady pace is essential because of the one-lane bridges, sharp turns, loose gravel, blind spots, and all the rivers that need to be crossed.

Being stranded for hours is a high possibility due to car trouble or weather issues. Therefore, bringing food and drinks for the journey is always recommended.

Insurance is also an issue due to the conditions of the F-roads in Iceland. Damage incurred by the under-carriage is not covered by insurance offered by the 4x4 rentals in Iceland. Furthermore, the rentals are not insured for any issues that may occur while crossing rivers or various water bodies.